I've long regarded Larry Brown one of the finest writers around. An opinion shared, I recently discovered, by Bob Dylan. Having just ordered his last, unfinished, novel, A Miracle of Catfish, I happened upon the following clip from a documentary, The Rough South of Larry Brown (wasn't there also a Rough South of Harry Crews a few years back?), directed by Gary Hawkins:

Despite my ambivalence regarding much of Slavoj Zizek's work, his article in support of the Iranian people, entitled Will the Cat Above the Precipice Fall Down?, makes some interesting and valid points. Also, on the same website, is Zizek's June 18 talk at Birkbeck College which covers some of the same points, but delivered in Zizek's inimitable lecturing style.
Posted by Woody Haut at 9:37 AM No comments:

I picked up this one based on enticing jacket comments by Pelecanos, Connelly, Offutt and Woodrell, read the first few stories, which I thought were good, but derivative. I put it aside for close to a year, picked it up again a few weeks ago and was blown away by it. How could I have thought it derivative, when Lange's is such an individual voice? It just goes to show that you have to be in the right frame of mind when reading a particular book. But Lange has definitely put his own stamp on the low- life, urban-grit short story as few others have been able to do. It put me in mind of Dennis Johnson's Jesus's Son, but it's more compact and consistent than the latter and its imagery is more precise. Lange could be thought of as the grandchild of Selby and Bukowski, and the cousin of Donald Ray Pollock, whose Knock Em Stiff bears certain similarities. In any case, Lange's low-life characters, as comic as they are tragic, invariably ring true, always pushing at what's possible, accompanied by some magnificent bits of linguistic juxtaposition. I was particularly amused by the following, from his story "Loss Prevention":

"Every junkie I've ever known has had a thing for Neil Young. Be he a punk, a metalhead, or just your garden-variety handlebar-mustachioed dirtbag, if he hauls around a monkey, he's going to have Decade in his collection, and he's bound to ruin more than a few parties by insisting that you play at least some of it, no matter that the prettiest girl in the room is begging for something she can dance to. Even if he gets off dope, he sticks with Neil, because by then Neil's become the soundtracks to his outlaw past. Let him hear 'Old Man' or 'Sugar Mountain' years after the fact, and everything in him will hum like a just-struck tuning fork as mind and body and blood harmonize in mutual longing for a time when desire was an easy itch to scratch."


Just as I was finishing Dead Boys, I came across an interview with him in the LA Weekly, and discovered that he's just produced a novel entitled This Wicked World. That's one I've got to get my hands on.
Posted by Woody Haut at 11:13 AM 1 comment:

Glenn Harper at International Crime Fiction has already written extensively about Domenico Starnone's First Execution (Europa editions). Suffice it to say that the novel is not only an engrossing post-modern crime novel, but one of the best I've read in recent years about the process of writing a crime novel, or, at any rate, a novel about the politics of violence and terrorism. Often a novel about the writing of a novel dies in its own footsteps, but this one works because of the honesty of the writing and its on-the-dime relevance. Here a committed person of the left writing about the danger of disillusionment and the detritus of what was once an apprehensible world. As in the following quote:

"A community is held together by spit. A community is the memory of something that once contained us and which we don't want to admit we have left behind us for good. It is distant laws. Abuses. Thickets of lawyers, magistrates, policemen. An encrustation of the fear of chaos and death. There are bonds of affection, occasional ties of solidarity, but they count for nothing. In contrast, hatred- now there is something endures, is powerful, and cuts like a steel wire. The lust for blood, its pulsing purplish flesh. Theoretically, you can sup on it whenever you like. Hatred and desire lie just under the frosting of good manners, of good morning, be my guest, pardon me, take your time, and thank you. All it takes for a neighborhood soccer team to want to cut the throat of the barista across the street is her sarcastic show of rooting, with a sneer, for the opposite neighborhood team. All it takes is the tenant upstairs who insists on hanging her sheets out to dry, depriving our bedroom of light. All it takes is a racket or a din, music playing too loud after midnight. Just a careless shove in the street. Someone staring a second too long at your woman. A community always knows, deep down, that its members have nothing in common, it's all just unfair competition, market forces, divergence, fracture, illegality dressed up to look perfectly legal, a violent presentation of the balance of power, prison, terror artfully scattered by the government, concentration camps (or stadiums: the horrible Chilean stadium to which the thugs and torturers of the US and Pinochet confined the opposition; all that rebellious fury I savored and gave voice to, that's what that stadium really was, proof positive that Fascism is the remedy when the masses fail to vote as they should)."

As I write this, two men are fighting over a parking place in the lot below while, on TV, hundreds of thousands are on the streets of Tehran.
Posted by Woody Haut at 4:18 PM No comments:

Jerome Charyn has long been one of my favorite writers. At its best, his writing attains a level of poetry rarely equalled in noir fiction. I suppose one could say that he specializes in the grand gesture, a particularly difficult type of writing in this so-called post-modern era, particularly when it comes to the genres in which he works. I can't think of any other writer who wears his heart on his sleeve so unashamedly. I thought I had most of Charyn's books, but from looking at a list of them I realize that I've really been slacking of late. My favorites are, of course, the Issac Quartet, but I also like Maria's Girls, The Good Policeman, The Seventh Babe, Elsinore, as well as non-fiction books like Movie land, Metropolis and Savage Shorthand- the Life and Death of Issac Babel. Though this is pretty much a promo for his 2008 book Johnny One-Eye: a Tale of the American Revolution, a novel that I have yet to read, I still find it interesting. I particularly like the first part in which he talks about using language as a weapon.

Posted by Woody Haut at 1:12 PM No comments: 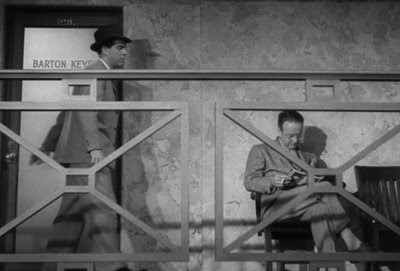 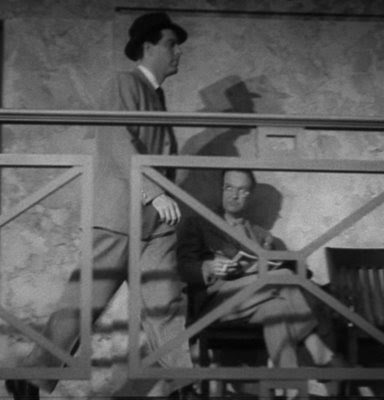 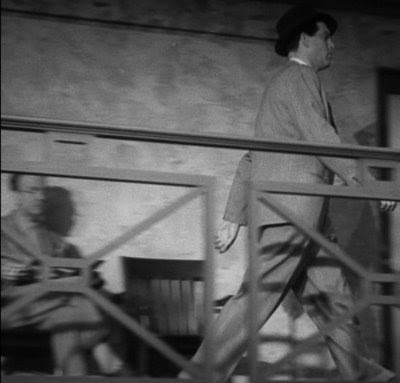 As reported by Adrian Wootton in today's Guardian, and first noticed by crime writers Mark Coggins and John Billheimer, Raymond Chandler appears as an extra in Wilder's movie. One can see him some 16 minutes into the film, reading (though we can't see exactly what he's reading) while Fred MacMurray walks by. Interesting given the frosty relationship between Chandler and Wilder, because, other than a home movie, it is the only time Chandler was captured on fim. But why hadn't anyone notice this before?
Posted by Woody Haut at 9:23 AM 3 comments:

The great Uraguayan journalist-novelist-essayist Edward Galeano talking about a variety of international crimes as told in his latest, Mirrors: The Story of Almost Everyone.

One hopes that Chavez's gift to Obama, Galeano's The Open Veins of Latin America, did not go unread.
Posted by Woody Haut at 11:34 AM No comments: