Having noted Sam Munson’s not all that laudatory review of Ilinca Zariopol-Johnston’s Searching for Cioran (Indiana University Press), entitled The Trouble With Being Cioran, I thought I’d Google my favorite pessimist/nihilist philosopher. I should have known that these days Cioran would have generated a cottage industry all its own (try, for instance, Cioran.eu). Anyone thinking they might be into the philosophy which noir fiction and film could, by a leap of the imagination, be said to be based upon should definitely try to sample Cioran, (particularly since he tends to blow his philosophical trumpet in short phrases). After all, Cioran can make the likes of Jim Thompson seem like a sunny optimist. At the same time, reading him can be quite exhilarating. I was trying to think when I first started reading Cioran. It must have been sometime in the early 1970s. Though I can’t recall how I first came across him. Perhaps it was the Susan Sontag essay? Or maybe there was a Rumanian connection via reading Eliade. Later, I would be impressed when staying with Ed and Jenny Dorn in Boulder during the early 1980s, I noticed a letter Ed had written to Cioran that was meant to accompany a copy of their newspaper Rolling Stock. The thought of Cioran reading RS appealed to me, though its slogan, If it moves, print it, seemed somewhat at odds with Cioran’s mood and tone. On the other hand, his oppositional view and cantankerous nature no doubt appealed to Ed. I'd like to think that Cioran, having received and read RS, ended up wearing cowboy boots and coming on like the talking horse in Gunslinger.
Posted by Woody Haut at 3:11 PM No comments:

I first came across Benjamin Appel in David Madden’s Tough Guy Writers of the Thirties, in which he contributed “Labels,” a perceptive essay in which Appel talks about tough guy and proletariat writing, maintaining that the best tough guy novels have endured because for such writers the genre was never a device or artifice, but constituted genuine reflections of the world, and that "tough" was merely a convenient term. Of course, we know now what Appel knew then, that guys like Appel, Algren, Fearing, Farrell, O’Hara, etc., were writing what they knew and writing it from the heart. In that essay, Appel also says that the proletariat novel had a shorter lifespan than "tough" fiction because it reflected a particular moment in history. On the other hand, it too produced some excellent novels, be it Jack Conroy’s The Disinherited, Mike Gold’s Jews Without Money and John Sandford’s The People From Heaven. Of course, tough guy, proletariat and noir at some point intersect, as in the work of George Milburn and William Cunningham and even Jim Thompson. But then categories are sometimes superfluous. On the one hand, good writing is good writing. On the other hand, they do provide cover and context, even if, these days, literary categorization has become more than ever a means of marketing books.

I also found in Madden's book, in an essay by George Grella (The Gangster Novel), a brief description of Appel’s novel Brain Guy. I later read that Appel was a friend of one of my favorite poet/crime writers, Kenneth Fearing, and that he was an early champion of Algren and O'Hara. All of which made me realize this was someone I really had to read. Since that time my Lion paperback copy of Brain Guy remains one of my prize possessions.

So who was Benjamin Appel?

He was born in 1907 in New York City. His parents emigrated from Poland and settled in Hell's Kitchen, known at the time for its crime, vice, corruption, and poverty, and which became the setting for many of his novels. Appel would attend the University of Pennsylvania, New York University and graduated from Lafayette College in 1929. As a young man, Appel worked as a bank clerk, farmer, lumberjack and factory-hand. He was also a housing inspector for New York City. During World War II, he served as an aviation mechanic. Between 1943 and 1945, he was employed by the U.S. Office of Civilian Defense and the War Manpower Commission. He was a special assistant to the U.S. Commissioner for the Philippines from 1945-46. His novel, Fortress in the Rice, was based on his experiences in the Philippines and was made into the 1963 movie Cry of Battle starring Rita Moreno and Van Heflin. Coincidentally, it would be one of the films playing at the movie theater when Lee Harvey Oswald was arrested for the murder of President Kennedy. Appel married Sophie Marshak in 1936 and they had three daughters. The family moved to Roosevelt, New Jersey, a New Deal resettlement town, where Appel lived until his death in 1977.

Appel's first published work was a book of poetry, Mixed Vintage, which appeared in 1929. During the 1930s he published widely in the "little" magazines. His first novel, Brain Guy, the story of small-time con men, poverty, prostitution and murder appeared in 1934. It was called "a street-corner Macbeth." Further novels dealt with the themes introduced in Appel's first novel: like Runaround (1937) which deals with politics, and The Power-House (1939), which tells the story of corruption in the formation of a labor union for waiters in New York. While The Dark Stain (1943) explores the tensions between black and white Americans and how racial prejudice can destroy everyone concerned. Appel’s gritty writing was often compared to Cain and Hammett. In the 1950s, he began publishing literature for young adults. His last book, The Fantastic Mirror: Science Fiction Through the Ages, was published in 1969.

Thanks to Stark House Press, along with the likes of Busted Flush and Hard Case, one of the best small publishers of noir fiction, we have not only Brain Guy, but three other excellent Appel novels: the Manila-set Plunder, Sweet Money Girl and Life and Death of a Tough Guy. All of them examples of low-life, tough-guy fiction from the dark side of America, and highly recommended.
Posted by Woody Haut at 1:51 PM No comments: 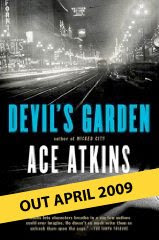 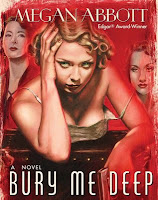 Crime fiction has long made use of actual cases and events to sustain fictional narratives. What began in De Quincey's time ("On Murder Considered as One of the Fine Arts"), has now become the bedrock for what is predominantly a reality-based genre. But basing novels on actual events also has its disadvantages. The danger is that reporting and research can become substitutes for depth and the imaginative process. Both these evocative novels- one published in April and the other not until July- are based on real events- Atkins’s on the Fatty Arbuckle-Virginia Rappe case, as investigated by Hammett in San Francisco in 1921, and Abbott’s on the trunk murders of the early 1930s. But the latter, centered on a woman trapped by gender and class, and which reads like a cross between a pre-production code Hollywood movie and a David Lynch horror film, is, I think, the more perceptive and imaginative of the two. Abbot's characters jump off the page, which means they, as much as the plot, are responsible for creating much of the narrative tension. At the same time, she allows events to proceed to their logical, if horrific, conclusion. On the other hand, Devil’s Garden reads less like a work of the imagination, and more like reportage, even when he’s clearly riffing on what might or might not have taken place, which he does most effectively in the scenes in which Hearst and Marion Davies appear. Not that reportage is necessarily a bad thing, but these days I find myself looking for something more in my crime fiction. For example, Atkins’s previous novel, White Shadow, which, for me, was one of the best crime novels of the past couple years (I haven’t read Wicked City, though I intend to do so), and a novel that not only depicts an era but is precise and perceptive when it comes its portrayals, locale and the contours of the case. For me, Devil’s Garden, unlike Bury Me Deep, just doesn't go far enough. But then Atkins has probably set himself a harder task. After all, so much has been written about both Arbuckle and Hammett, from Jerry Stahl to Joe Gores. Having said that, the trunk murders, as Abbott acknowledges in her Afterward, has also been documented. Maybe it’s just a matter of having become jaded from reading too much crime fiction, or not being in the right frame of mind when I read Atkins’s novel. Anyway, don’t take my word for it. Read both novels when they appear and decide for yourself. Now to get on to Wicked City...


An added note: I was interested to see that Atkins acknowledges Don Herron and David Fecheimer, as having helped him in his research for Devil’s Garden. It’s not surprising. Herron is the authority on Hammett’s SF (as well as author of an excellent book on Willeford), and Fecheimer is the well-known San Francisco private investigator, or at least well known to readers of crime fiction. Interestingly, I knew Fecheimer when we were both at San Francisco State and even remember the day when, after finishing the Maltese Falcon, he got himself hired as a private investigator. I had also recently read Hammett, and the same idea had occurred to me, that it might be interesting to be a private investigator, though I was too busy with others things to pursue the matter. The last time I saw David I was reading Borges, and I remember him recommending I try De Quincey, probably thinking about “On Murder Considered as One of the Fine Arts.” Maybe in some Brogesian universe we’ve swapped places, though I don’t know if I’ve ever had the patience to be a private eye. Though the research aspect might be another matter.
Posted by Woody Haut at 4:40 PM No comments:

Laurie Pepper tells the story of Art Pepper's life in the space of one of his three minute solos. For me, her graphics recall the work of Bruce Conner or Stan Vanderbeek. Also, for those who haven't done so, read Art's autobiography (written with Laurie), Straight Life. It's real life jazz noir at its best. And watch out for more from Laurie Pepper.
Posted by Woody Haut at 2:27 PM No comments: