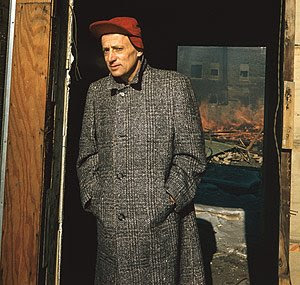 Arguably Chicago's greatest writer- or at least my personal favorite- Nelson Algren, would be 100 this year. Have a look at this article that appeared in the LA Times, as well as the story in the Chicago Reader.

Notice the absence of Walk on the Wild Side and Man With a Golden Arm. They're both, of course, are classics, but I have a preference for his earlier work, particularly that written during the Depression, as well as his short stories and essays. Also, if you can find a copy check out Conversations with Nelson Algren.
Posted by Woody Haut at 7:55 PM 1 comment:


Let the Right On In

I finally got around to seeing Tomas Alfredson's Let the Right One In, which I had been hearing so much about. It didn't disappoint. In fact, after leaving the Camden Town cinema, I sort of had the feeling that everyone I saw might well be a potential vampire. So I thought I'd better buy a copy of the latest novel- Handling the Undead- by John Ajvide Lindqvist, the screenwriter and author of the novel on which Alfredson's film is based (more on that novel at a later date). For me, Let the Right One In is arguably the best vampire films of recent years. It's also very perceptive about the transition from latency to puberty, and ingenious in its use of the vampire story as a metaphor for female puberty. I also found it very touching in its exploration of the relationships formed during childhood. Though comparing the burden of childhood with the undead might be stretching the point, I was nevertheless ready, even from the film's opening shots of all that snow falling, to suspend disbelief. It's beautifully shot, from those opening shots to the bleak landscape and horrors embedded in the alienating contours of 1950s social housing. And there were also some truly frightening scenes, including one that includes cats (I'll say no more). Though sometimes I thought its use of the genre's cliches, like the girl climbing the hospital wall, might have been elimianted without doing any harm to the narrative or mood of the film likewise, the ending, which I thought unnecessary. I had a look at the novel afterwards and  noticed that Lindqvuist points out that the town has no church, and so can offer no protection against vampires, and that nearby are the remains of old mill, which I take it is a reference Dreyer’s classic film Vampyr. And the two child actors here are excellent, particularly the girl who has that amazing ability to look young at one moment and then a moment later, old and world weary. Though it might be yet one more film that follows the strand of horror which plays on fears of a superstitiuous past reaching into the present to destroy life through contamination, I think this ranks right up there with Abel Ferrara's The Addiction, made some twenty years ago, as the best vampire film of recent years, and is certainly better and more important than Twilight, First Blood, etc., and more tragic than Herzog’s Nosferatu. I also liked the way the tragic elements were tempered by near-comedy, like  the bumbling older man who initially lives with the girl. I guess the Scandanavians- Strindberg, Dreyer, Munch- are particularly adept at this sort of thing. But I hate to think what the American remake is going to be like.
Posted by Woody Haut at 3:02 PM 2 comments: 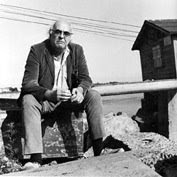 Polis is This: Charles Olson and the Persistance of Place

For those, like myself, who weren’t fortunate enough to catch this on PBS, you can now watch Polis is This: Charles Olson and the Persistance of Place in its entirety on the net. I recommend it highly. It’s a film, beautifully produced, that goes some way in doing justice to one of the greatest American poets of the 20th century. As well as Olson- including footage that I’d never seen before- and his son Charlie, the film features John Malkovich, who reads a handful of Olson’s poems, Robert Creeley, Amiri Baraka, Diane DiPrima, Pete Seeger, Jonathan Williams, Vincent Ferrini, Anne Waldman, Charles Boer, John Sinclair, Stefan Wolpe, Charles Stein, Michael Rumaker & Black Mountain College. I only met Olson once, at a party at Panna Grady’s house following Olson’s reading at the London Poetry Festival that took place at the South Bank way back in 1967, just a few years before Olson died. We had a lengthy conversation that seemed to center on the 1948 Democratic Convention (Olson was, of course, a Henry Wallace supporter). One of my regrets is that I was never able to study with him. But his writings are more than enough to go on. Every literate person owes it to themselves to have a look at the early Maximus Poems, Human Universe and the Mayan Letters. Thanks to Henry Ferrini and Ferrini Productions for this wonderful film.
Posted by Woody Haut at 4:09 PM No comments: