Too bad critics like Donald Phelps, Gilbert Sorrentino, Guy Davenport or, for that matter, William Corbett aren't around to write about Arcana- A Stephen Jonas Reader. All no doubt would have revelled in writing about Jonas and the subterranean world he precariously inhabited. Ever the poete maudit, Jonas would emerge seemingly from nowhere to play an integral role in the 1950s Boston poetry scene. And it would be no understatement to say that he was one of the most important mid-20th century poets to not be included in Don Allen's ground-breaking New American Poetry anthology. Arcana is ample evidence of what many readers have, over the years, missed out on. It brings together work, published and unpublished, including large sections from two collections, Orgasms/Dominations and Exercises for Ear- titles that reflect their poems which can move in a flash from in-your-face to subtle- and individual poems that originally appeared in small  magazines of the 1950s and 1960s like Measure, Origin, Floating Bear, Yugen and Caterpillar.

The two collections and individual poems differ in content and approach. Likewise accounts of Jonas' life. A gay African-American, Jonas (1921-1970) seemed to be  an enigma even to those who knew him. A man of various institutions- not academic, but military, penal and mental- Jonas could be described as the link connecting Pound and Olson to John Wieners  Joe Dunn, Robin Blaser and, when it comes to the deployment of the serial poem, Jack Spicer.  Spicer would acknowledge Jonas by basing his character Washington Jones in his detective novel Tower of Babel  at least partly on Jonas. Furthermore, according to Blaser as quoted in Ellingham and Killiam's Poet Be Like God, Spicer would dedicate his "translation" of Lorca's Ode to Walt Whitman to Jonas because it was "Steve who taught me to use anger (as opposed to angry irony) in a poem."An autodidact and man who inhabited the margins of the culture, Jonas was, on the one hand, well-versed in the classics, and, on the other, au courant with the language of the street. Above all, he was a jazz poet, with  various  references to musicians like Charlie Parker and Ornette Coleman, and a finely tuned ear that depended on precise timing and a be-bop control of both line and attack.

"....not so much for receiving
stolen goods
as for placing the junk
dead as the world
before the senses
In such times
one is put upon within
You know how we squeeze today
for meaning
the few words we have left to us
Here in a word is the sea before me
but the sea cannot be squeezed
So I sit as close to it as close as safe
The sea speaks if speech be sound
but speech is not sound
so turn for meaning
to the Poem..."
(from LOVE, THE POEM, THE SEA & OTHER PIECES EXAMINED BY ME) 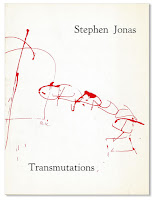 I can't recall when I first  read Jonas- sometime in the late 1960s. Perhaps it was  then or later that I came  across the Ferry Press'  Transmutations, followed a few decades later by  Jonas' Selected Writings (1994). The latter was, for me, something like an incendiary device, almost too explosive to handle. Just a cursory look was enough to let me know that here was someone who had taken on board Pound's crankiness, a Black Mountain lyrical quality, and  Spicer and Duncan's obsessive pursuit of the occult, all of which articulated in his own  version of Olson's Projective Verse dictated by breath and the notion, now something of a cliché, that "polis is eyes." With  references, on one hand, to Greek myths, and, on the other, to street level  prostitutes, gay hustlers, petty thieves or junkies, Jonas' poetry sounded  like it could have come straight out of the pages of a book like Genet's Thieves' Journal.

"Spain is located somewhere between Polk Street & Laguna Beach/
as you cross the Oakland Bridge into Portugal/
Oh, that Spicer/
he was a flamenco, that one/
for wld save America from
the abuses of rime. Like Lorca (our Fedy) was 'gipsified.'
Heard 'Bird's' playing & for three years
didn't know the taste of meat. sd. he didn't know
music had attained to it. A tear & one blue note upon yr brow..."
(CANTE JONDO FOR SOUL BROTHER JACK SPICER, HIS BELOVED CALIFORNIA & ANDALUSIA OF LORCA)

One can be forgiven for thinking that, for Jonas' work, the whole can be more than the sum of its parts. But any close examination will reveal that the parts are more than resilient and equal to the task, capable of standing on their own. The determining feature being Jonas' use of space, margins, parenthetical enclosures, line breaks and the exploration of breath and rhythms that power the poem, making him sound like the most cultured of that era's hard-boppers. Particularly in Exercises for Ear, the fragments of which display a hip intensity informed by an eye and ear that's never less than accurate, and lines that are seem like nuanced objects, existing somewhere between anger, observation and a sly sense of humour. Forget schools of poetry, what it all comes down to is the eye, the ear, how one views the world, and the manner in which that view reaches into every crevice of the poem.

Although Jonas had advocates such as Gerrit Lansing, he would in his lifetime never receive  the recognition he deserved. Published, yes, but, until recently, rarely written about. The exceptions being Lansing's Preface to Exercises for Ear, Torra's introduction to the Selected Poems, Garrett Caples' interview with David Rich, and the late critic, poet and translator David Rattray's 1991 essay  "Lightning Over the Treasury," that would appear in his How I Became One of the Invisible (Semiotexte).  Though it should be said that  Rattray's essay focuses less on Jonas' poetry than on his eccentricities, as he, Rattray and others tried to negotiate a world in which  drug taking, all night conversations and cultural circumlocutions were the currency of a close knit group of marginal figures.

"the set-up of a poem
may not always please
the eye;
but the ear can be
led
conducted along
surprising causeways
where the hither-to un-
expected
(one might even venture un-
suspected)
comes in-
to prominence."
(Exercises for Ear LXIV)

All of which makes the publication of Arcana is not only welcome but long overdue. And City Lights has to be commended for getting Jonas' work out there.  Likewise, the book's editors Garrett Caples, Derek Fenner, David Rich and Joseph Torra.  Their introductory remarks and postscript have managed to not only gumshoe Jonas' life- a noir existence by any definition of the term- but to place his poetry in a historical context.

Of course,  Jonas, like many a poete maudit,  had personal problems. These no doubt fed into the occasional off-the-wall sentiment- though none worse than Spicer's anti-semitic diatribe, or Pound's WW2 rants- not to mention run-ins with the law. But Jonas was never one to take an easy turn, much less turn-of-phrase, or allow himself or his  poetry to become an object of public consumption. Strip away some of the excess and what is left is a beauty and sense of being in the world that runs deep.  As  I mentioned elsewhere, no matter good you might have thought Jonas was, read this volume and you'll discover he was even better. One hopes Arcana will succeed in placing Jonas' work before a wider  poetry reading public.

"i have come to
chew up yr language

(at the service
entrance"
(CVIII, Exercises for Ear)


You can hear Stephen Jonas reading (from around 19 minutes) in Joseph Torra's excellent talk on Jonas.

Posted by Woody Haut at 4:50 PM No comments: 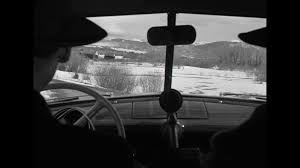 Why do you punks make me do it?
growls the cop as he beats the shit
out of a pathetic street hood. As if
the same old same old, aggressor
blaming victim, perking watch and
wonder. Law and order cracking as
inevitable as the saturated light, an
apartment filled with testosteronised
artifacts: what once was, will never
be. Violence, as always, feeding the
conundrum. If only it wasn't so addictive,
or family of last resort. A jones exiling
him to a sparsely populated snow-
ridden town, viewed- a movie within
a movie- through a windscreen, the
schtumed backseat viewer cachéd
in their own private critique, bleached
out by the death of a young girl at the
hands of a teenager barely knowing
better. With darkness bleeding into
domesticity, a match is lit for unblinking
eyes, and a wounded plea to locate
her brother before revenge can freeze
his tracks. Frightened, the kid invariably
slips from higher ground, recycling a
geology of clichés, footnotes in an
expurgated history of crime and
punishment. Fifty years on, the screen-
writer, blagging in his local coffee shop,
tells a redacted story: how he'd simply
wanted the cop to return to the city a
different person. But the studio’s arc was
non-negotiable. After all, the politics of
money dictates that only a miracle can
suffice. A capitulation, however generous,
not quite more than barely nothing at all. 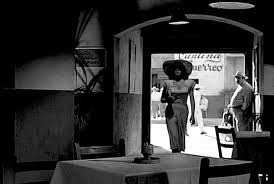 It’s all about that hat, and the
light, Acapulco golden, straight
outta the sun, fat man staring,
one last cramped tete-a-tete
with Mitchum. Throwing down
mis-coined phrases: like it's a
small world or a big sign for a
dame with a rod or a guy with
a knitting needle. They say no
one is all bad, but she comes
close. A serial betrayer. Who
never claimed to be anything
other than herself. Gallows
steadfastly high. That's how it
works if it works at all. She
walks into a bar and finds you
there, not even capable of
hatred. Dream on, have another
Cuba Libre on me. You know,
like one for the road that never
ends, that is until suddenly it does.
Double-murderer, sans chapeau,
dressing as a nun, pretending
she has the Big Guy on her side.
But isn't it true that it's always
the psychopath who take charge.
Machine-gun hidden behind a
tree, cash on the floor, blood on
the wheel. And simpering Ann
now free to marry her childhood
Rotarian. Mitch aside,  it can
only be a losing battle, with
everyone no one in disguise.