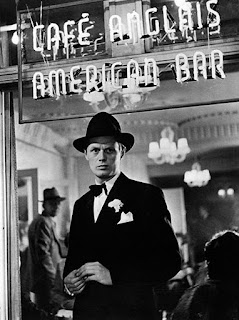 Warning: when blacklisted, better to become an export,
like a bottled beer. With a never-to-be-read novel tucked
under your belt. The point being there was no point.
The shadows, all too familiar. Urban sleaze slicing up
a foreign landscape where it's always night and the city
is still the city.  This time a depleted London, where Dassin
is sent to recoup Zanuck's frozen profits. Shooting fast,
the most expensive scenes first, to keep the studio “on
the hook.” Harry Fabian, whether unlikeable corrupter
or fast-talking wide-boy,  traipses through dark alleyways
and pocked bomb sites. There's rationing for everyone
save those who would follow the money. Kersh’s novel
bought, still unread, by Charles Feldman for $45,000,
then selling book and script to Zanuck for $175,000.
A tasty return, but, hey, turnarounds are what Hollywood's
all about. So long as one can milk the dregs: in this case,
Fabian, the Silver Fox and wrestling, punctuated by
dawn-and-dusk photography,  and a litany of geo-exotica:
Soho’s Richmond Buildings, St Martin’s Lane and in-the-Field,
Waterloo Bridge, the Shot Tower, St Paul’s, Charing Cross
Road, Trafalgar Square, County Hall, Leicester Square’s
Cafe Anglais, and Hammersmith Bridge, where, a half-hour
of light, Dassin, using six cameras, completed twenty-two
shots in eighteen minutes.True to its title, though more
so had anyone been interested enough to read the novel. 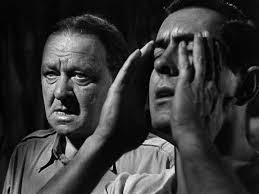 Forget the reprobates, crawling parasites and fallen angels
who some say have flown too close to the ground. Only to
lose yourself amongst their wounded ilk: barkers, freaks,
dodgy mind-readers and cross-dressing shrinks. Each with
a sideshow of their own. No way out, other than to turn into
some ill-fated geek, down on his luck, his cage littered with
bottles of rot-gut, sleepless nights spent howling at the moon.
Gresham first heard about such creatures from Doc Faraday,
an ex-carny, who, like Gresham, had thrown in his lot with
the Lincoln Brigade. “I can’t understand how a man can get
that low,” says Stanton, as he takes another wrong road to
nowhere, reading the signs but never their significance.
How easy to fall, in an era before euphemisms became a
language spoken beyond the beyond. Back when cops still
smiled as their truncheons split skulls, owned or borrowed
by the discontented or dispossessed. So basic the desire for
a world of one's own. Can he hack geekdom? “I was born to
it,” Stanton declares. Words inked at the Dixie Hotel, Coney
Island, the missus in the arms of some high church author.
No passaran, though the darkness surrounds us, but no god-
damn big car for the effort. The rope breaks, but eventually
he's just  another suicide statistic. As for Goulding, paranoid
the blacklist would come knocking, his peccadilloes revealed,
a studio mark, who would never again walk that razor's edge.

Posted by Woody Haut at 5:38 PM No comments:

Philly and South Jersey Gothic: On Jay A. Gertzman's Pulp According to David Goodis 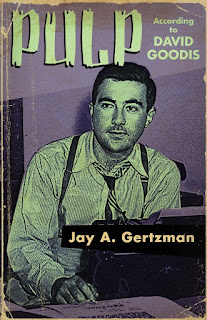 Hard-boiled noir fiction has produced more than its share of cult writers, but pulp novelist and periodically successful Hollywood screenwriter David Goodis is in a league of his own. His status, first nurtured in France through Gallimard's Série Noire imprint, has grown steadily since Francois Truffaut;s film Tirez fur le pianiste, based on Goodis's novel Down There (1956), was released in 1960. That book would be reprinted in the United States a few years later by Grove Press, retitled, to capitalize on the film, Shoot the Piano Player (1962). What success the latter garnered no doubt had less to do with Goodis's name and reputation than with Truffaut's, though Henry Miller's blurb gracing its cover might have given the reprint added heft. Yet even before Down There's initial publication as a Gold Medal paperback in 1956, Goodis had some 14 novels under his belt, including classics like Dark Passage (1946), adapted for the screen by Delmer Daves in 1947; Nightfall (1947), adapted by Stirling Silliphant for Jacques Tourneur in 1957; and The Burglar (1953), filmed by Paul Wendkos in 1957 from a screenplay- his most accomplished- by Goodis himself.

The publication of Philippe Garnier's groundbreaking Goodis, la vie en noir et blanc in France in 1984 went some way toward confirming Goodis's status as a cult writer. Nine years later, James Sallis's Difficult Lives (1993) placed Goodis in a select pantheon alongside two other cult noir writers, Jim Thompson and Chester Himes.  Goodis would also feature heavily in two of my own books, Pulp Culture: Hardboiled Fiction and the Cold War (1995) and Heartbreak and Vine: The Fate of Hardboiled Writers in Hollywood (2002). The last three volumes all owe a debt to Garnier's investigative work, which turned up a number of people who had been close to Goodis throughout his truly troubled life.

(You can click here to read the review in its entirety on the L.A. Review of Books website.) 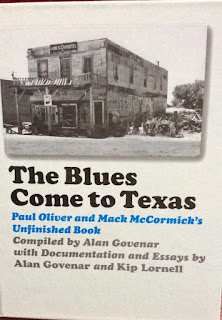 It seems like I've been hearing about this book for ever. The Blues Came to Texas was, and is, intended as a definitive history of Texas blues.  It was first  conceived way back in 1959 at a time when blues scholarship was still in its infancy, by two of the most renown blues scholars Paul Oliver, author of, amongst many other books Blues Fell This Morning and Songsters and Saints, and Mack McCormick, "discoverer" of Mance Lipscomb and Lighnin' Hopkins, also known for his research on Robert Johnson and, for legal reasons, perhaps the most infamous blues research project, on Johnson entitled The Biography of a Phantom, never to see the light of day. For various reasons- health problems, mistrust and the difficulties of transatlantic communication in a pre-internet era- the book has languished in literary limbo ever since 1977. Thanks to Texas A&M University, the project is now available, thanks to researcher, photographer and film-maker Alan Govenar who, after conferring with Oliver during the last years of the latter's life. revived the project. Urged on by the likes of  Tony Russell and Arhoolie's Chris Strachwitz, Govenar, in turn, brought on board the noted musicologist Kip Lornell to assist him in putting together the final manuscript.

Their collaboration certainly does not disappoint. It really is the definitive history of Texas blues, and though a large format, relatively expensive book, this is hardly the coffee table book its size implies. Instead, the text  predominates, along with a handful of photographs. No doubt this book is really meant for a small band of blues scholars, but I think any blues enthusiast, particularly those interested in the southwest variety, will want to give this volume serious attention. This even though  the publisher notes that what is now available is, in fact, more like a literary artifact, a draft of what was, and is, a massive research project. Certainly,  the unfinished format of the book- chapters listed as sections in alphabetical order, notes in which Oliver queries McCormick, missing texts, grammatical inconsistencies, etc.- would back up the publisher's claim. Though that hardly detracts from the book's importance.  Though hopefully a more affordable format will one day become available. Nevertheless, The Blues Come to Texas is finally here, and the wait has been long but well worth it.
Posted by Woody Haut at 5:25 PM No comments: