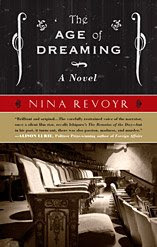 The Age of Dreaming by Nina Revoyr

Like Revoyr’s excellent Southland (2003), The Age of Dreaming could be described as a historical crime novel about race and culture. Yet it’s more than that. Instead of centering, as in her previous book, on the interweaving stories of the generational struggles of Japanese-American and African American families in and around the Crenshaw district of Los Angeles, this elegantly written first-person narrative focuses on a single individual, Jun Nakayama, a Japanese actor during Hollywood’s silent film era. Revoyr’s central character must surely be based on Sessue Hayakawa, whose career ground to a halt in 1922, only to be revived thirty-five years later in Bridge on the River Kwai. The novel opens in 1964 when Nakayama is phoned by a young film fan who wants to interview him. Revoyr takes her time telling the story of this once sought-after and handsome actor who, forty years later, lives in obscurity in a small West Hollywood apartment. Eventually the interviewer admits to wanting Nakayama to star in a film he’s written. Nakayama considers the offer- it would be his first speaking role- but he knows if he takes the role, it might, in the process, dig up the vestiges of a murder, based on the brutal slaying of Hollywood director William Desmond Taylor, that, for many years, has been buried in the past.

Incredible that Nakayama-Hayakawa could be a star in Hollywood at a time when, other than in neighborhoods like Crenshaw, Japanese Americans were not allowed to own property or enroll in public schools. In fact, Revoyr is excellent at describing the racially charged atmosphere of the period, just as she is at depicting the sight and smells of the city, or the attraction of silent films- “[There] was a purity to silent films that can never be recaptured in this clamorous age of sound effects and talking...we understood that moving images are the catalysts of dreams- more elegant when undisturbed by voices.” Of Japanese and Polish descent, Revoyr, in The Age of Dreaming and Southland- both books beautifully presented by Akashic- has become one of the best chroniclers of the area’s social and cultural attitudes from the 1920s to the 1960s. A novel for those interested in the early days of Hollywood, the Japanese American experience, or just searching for crime fiction slightly more subtle and literary than usual.
Posted by Woody Haut at 10:47 AM 1 comment:

What I’m Listening to At the Moment

-Son House- The Original Delta Blues (Columbia). The man with the National Tricone sound and the hardest driving rhythm to go with it. Talk about giving your all. I remember seeing him live on various occasions and wondering if he was going to survive his performance.

-Lucinda Williams- West (Lost Highyway). When I’m in the mood for it, Lucinda is unbeatable. The songs, the voice, the backing. But there always seems to be one dud track on each album- usually some kind of rocker- that puts me off. West was better than her previous offering, as well as her latest. Still, even bad Lucinda is better than 95% of everything else out there.

-Bob Dylan- Tell Tale Signs (Columbia). This will do until the studio album arrives. Actually, it provides some of the best insight yet into how Dylan structures his sound. Some outstanding live tracks. I’ve always wanted to hear Dylan in a bluegrass setting. Maybe he should have joined the New Lost City Ramblers back in 1963.

-Paul Desmond- Easy Living (RCA). There’s something about Desmond and Jim Hall. Or, for that matter Desmond and Bickert. I used to dismiss Desmond because of the Brubeck connection, but that tone is unbeatable. Any RCA tracks is worth listening to.

-Mississippi Shieks- Stop and Listen (Yazoo). My favorite string band. There are so many great songs that it’s impossible not to listen to it.

-David Lindley- Twango Bongo III- An older Lindley CD, but this one harkens back to his earlier banjo and fiddle stylings- though here tranferred to the bouzouki and oud. And of course there’s Mr. Dave’s achingly beautiful lap slide guitar in abundance.

-Various- Folks He Sure Do Pull Some Bow- Vintage Fiddle Music, 1927-1935 (Old Hat). Another great Old Hat release. Have a look at Elijah Ward’s Escaping the Delta for the importance of African-American string band music. Every track here, as well as on the previous Violin Sing the Blues For Me, is a winner.

-Charlie Christian- The Genius of the Electric Guitar (Columbia). What can one say about Christian? He really was the genius. John Schofield says in the notes that Miles Davis once told him he thought that Christian was not only the originator of the bebop movement but Bird and Diz's main influence. It makes sense, especially when you listen to their long flowing lines and rhythmic twists. Christian takes western swing guitar playing, overlays it on the blues, and the result is the bebop revolution. Soundwise, these tracks are the best ever. I could listen to them forever. And I never thought I would actually like Benny Goodman.

-Hank Williams- The Unreleased Recordings (Time-Life). Must be the year for box sets. I would have liked to have a bit more of in-between song patter, and maybe a few Luke the Drifter sagas thrown in, but this is an otherwise perfect set of recordings taken from Hank’s early morning radio broadcasts. And to think there’s more to come.

-Various- People Take Warnig- Murder Ballads and Disaster Songs, 1913-1938 (Tompkins Square). A great selection, particularly for those who couldn’t afford the likes of Dust-to-Digital’s phenomenal Goodby Babylon. Okay so some of these songs can be found elsewhere, but placed thematically the songs take on new meaning.

-Trevor Watts and Peter Knight- Reunion (Hi4Head). I miss Moire Music, with that Ornette/African sound, particularly the trio that appeared on Intakt. But this live collaboration between Watts and the former Steeleye Span fiddler is a never less than interesting.

-Monk Alone, The Complete Columbia Studio Recordings, 1962-68 (Columbia). This is killer stuff. And proof that Monk was a great, if, of course, eccentric, stride piano player. Taken together, Monk places some of these ballads on another planet. Monk’s harmonic sense is sublime.

-Bassekou Kuyate and Ngoni ba- Segu Blue (Outhere). It's the texture of their sound- voices and ngoni playing- which is so mesmerizing. Everything so seamless. How much more of this Bamana sound of Segu, the region to the east of Bamako, is there? Because I want more.

And for all the lap and pedal steel players and punters, check out Steel Guitar Jazz site. It’ll keep you buzzing for days.
Posted by Woody Haut at 2:09 PM 1 comment: